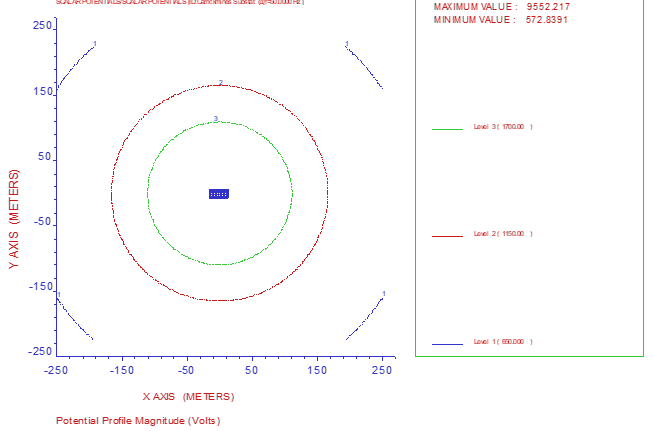 Electrical faults are only described as such because the volume of charge exceeds the intention of the power generation and distribution suppliers, and the tolerances of equipment connected to it. In real terms fault current is no different from normal current, there is just more of it than is intended. The problems presented by fault current is due to its excess, which is where an electrical earthing system becomes very important. The purpose of an electrical earthing system is to safely discharge fault current within the earth, and therefore away from life and assets.

Electricity is a form of energy, just like heat, sound, or kinetic and by changing the variety of energy under consideration it may be easier to grasp the importance of the Rise of Earth Potential studies (sometimes referred to as ROEP, or Earth Potential Rise [EPR], or Grid Potential Rise [GPR]). Think of dropping a stone in a body of water; from the point of impact a splash will occur and ripples in the water will radiate out in concentric circles. The larger the stone, the larger the ripples and splash will be. What is happening in this example is that the weight of the stone forces the water directly beneath its point of impact down, but the displaced water has an opposite force of pushing back against this and as such the water recoils a bit like a spring.

Potential and kinetic energy transfer backwards and forwards until the friction between the water’s atoms slows the exchange to nothing. The ripples that we see on the surface are caused by that transference between potential and kinetic energy. The electrical equivalent to friction is resistance and when being discussed as an attribute of a mass of ground we refer to that as the resistivity of the ground (sometimes simply referenced as “soil”). For more information relating to soil resistivity, or the process by which it is determined, please feel free to visit the dedicated service page for soil resistivity surveys, or by seeing how important they are in electrical earthing system design by visiting the requisite page for that survey. Much like the manner in which the ripples on a pond radiate from the point of impact from the stone, so too does electrical energy radiate within the ground. In the same case with the size of the stone being proportional to the ripples on the pond the attributes of electrical fault current will determine the distance it radiates in line with the resistivity of the soil.

There is another attribute that electrical energy possesses that must be considered and that is conductance and inductance. Considering again the radiating electrical energy within the earth during a fault current event should the discharging current encounter a more conductive medium it is likely to discharge through that instead of the ground as it will provide a path of lower electrical resistance. This can have significant consequences if the item through which the fault current is now flowing is a sensitive system. When professional electrical earthing system designers, like those at Earthing Services, specify an electrical earthing system they determine how far, and at what volume, fault current is likely to travel; this calculation is known as identifying the Rise of Earth Potential (ROEP, or the other references earlier identified). Ensuring that the ROEP does not threaten adjacent structures or infrastructure is an important responsibility and it is for that reason that customers seek the reassurance and peace of mind of working with Earthing Services, knowing that they are in safe hands.